In our last Newsletter we said that the Bank would be announcing a new approach to performance management, which would see the introduction of ‘catch-ups’ and the removal of ratings. But let’s be clear, simply taking a system that was introduced by the likes of Adobe, a US software company, and dropping it in to Lloyds Banking Group is not going to create an agile organisation nor is it a panacea for all of the performance management problems we described in our last Newsletter.

Where’s The Training For Line Managers?

One of the key things Adobe did when introducing the new system did was to invest heavily in improving the capabilities of their line managers to enable them to move away from a ratings based approach to performance management to one that requires more real time, developmental discussions.

As we said last week, the Bank’s new performance management system is being introduced with effect from 1st January 2019 and line managers have been given two week’s notice of the changes. In fact, had we not published our Newsletter last week members wouldn’t have found out about the changes until their return to work in January 2019.

According to Donna Morris, Senior Vice President at Adobe responsible for introducing the new performance management system, “We held training sessions with managers to help guide them on how to set expectations, give feedback, and be prepared to make compensation decisions”.

Even despite the intense training Adobe “found that managers had difficulty with growth discussions, as they felt they did not have all the answers for staff in guiding them around promotional opportunities.”

What’s the Bank done to ensure that line managers, who will be responsible for ensuring that the new system is delivered, are capable of meeting the expectations of staff? Nothing yet!

It’s that kind of half-baked approach, which will see this new system, which we have been demanding for years, fail. The Bank wants everything done yesterday and is not prepared to invest time and money in making sure that things are done properly. That’s what Adobe, Microsoft, General Electric, Deloitte and Accenture have done.

Long Live The ‘Check In’

Like the Adobe system, there will be at least 4  ‘Check- ins’ and these will last between 30-60 minutes. According to the Bank no paperwork will need to be prepared for these meetings, either before or after, and there will be no outputs. All meetings will use the same five questions:

Members are not stupid, the idea that they would enter into conversations on the above questions without making sure that they are prepared is fanciful. The answers members give to those questions have consequences – be that when it comes to determining who is being made redundant or which member of staff is getting the largest share of the reward pie – and they need to be prepared to fight their corner. In a growing IT organisation like Adobe for example, you can have these whimsical discussions but jobs are being lost all the time in Lloyds Banking Group and members need to protect themselves; because nobody else will.

The Union will be providing detailed guidance for members on how to prepare for these ‘Check-in’ meetings and that will be available early in the New Year.

In our next Newsletter we will deal with the issue of ratings and reward. In the meantime, members with any questions can contact the Union’s Advice Team on 01234 262868 Choose Option 1. 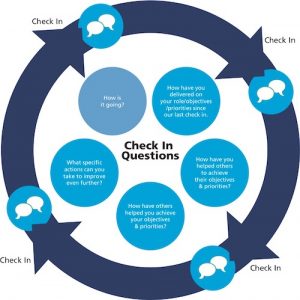