As a result of the union’s successful campaign to highlight the monstrous differences in pension allowances between LBG’s executive directors and the vast majority of staff, Mr. Antonio Horta-Osorio, Group Chief Executive and Mr Stuart Sinclair, Chairman of the Group’s Remuneration Committee have been told they must attend a joint meeting of Work and Pensions Select Committee and Business, Energy and Industrial Strategy Committee to discuss pension allowances in Lloyds. 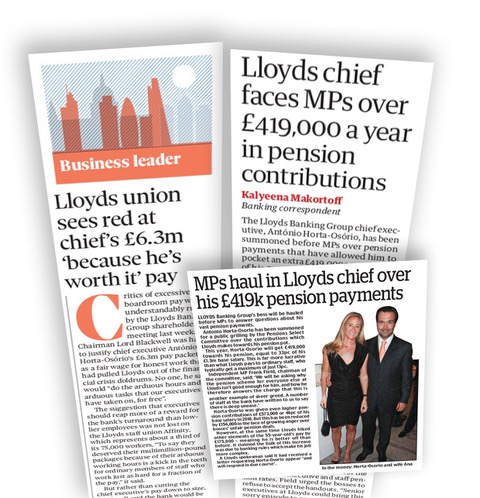 Mr Frank Field, Chair of the Work and Pensions Committee, has said: “We will be asking why the pension scheme for everyone at Lloyds isn’t good enough for him [Mr. Horta-Osorio], and how he therefore answers the charge that this is another example of sheer greed…..”.

In our letter to Mr. Field on the pension allowances for Lloyds executive directors, a copy of which is available on the union’s website, we said:

“The explanations offered by the various Remuneration Committees for their actions are specious and it’s clear they are part of the problem and not the solution. In Lloyds Banking Group, the Remuneration Committee under the Chairmanship of Mr. Stuart Sinclair and previously, Ms. Anita Frew, did nothing about the fact that the Group Chief Executive was still entitled to a final salary pension despite the fact that such a benefit had been removed from all staff in 2014.

We would urge the Work and Pensions Select Committee to launch an inquiry and make Remuneration Committee Chairmen explain their actions.”

The union will be writing to Mr Field next week to respond to the letter sent to his Committee by Mr. Stuart Sinclair justifying the pension allowances awarded to executive directors. Our letter will also be put on the Union’s website. The Union will also be offering whatever assistance we can to the two Committees so that they can get to the bottom of the Lloyds pension scandal.

Members with any questions on this Newsletter can contact the Union’s Advice Team on 01234 262868.