Given the precarious nature of the financial advice business and the growth model proposed by Lloyds Banking Group for the new Joint Venture, the legal status of the Lloyds Bank enhanced severance terms and job security policy is extremely important.

The issue is a simple one. Are the heritage Lloyds Bank’s enhanced severance terms contractual?

In one of the recent Q&As the Bank responds to the question: “Can I have confirmation of what terms and conditions are contractual and which are not?” with the table set out below: 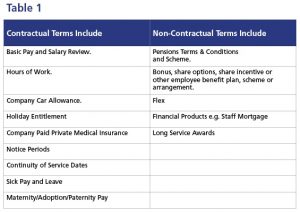 A few years ago 250 Lloyds staff were forced to move to IBM in a TUPE transfer. At the time staff were told by the Bank that “For Lloyds……heritage colleagues severance terms are contractual and are therefore protected under TUPE regulations”. (Colleague Briefing Pack, 6th June 2017) In a letter to members, Rebecca Priestly, People Director – Policy and Employee Relations said “….we consider a court is likely to find the terms to be contractual.”

It is important that members know their legal rights now, rather than waiting until it’s too close to the transfer date to do anything about it. We propose that staff in Wealth Management who are being transferred to JV send this letter to Ms. Sara Deaves, UK Wealth Director asking her to confirm the legal position of the heritage Lloyds severance terms. In that way you know that your severance terms are being protected indefinitely.

Members with any questions on this Newsletter or the transfer can contact the Union’s Bedford Office on 01234 262868 or they can email us at 24hours@btuonline.co.uk.