The 2020 pay pot is 2.4% compared to 2.6% last year. However, the Office for Budget Responsibility, which provides independent and authoritative analysis of the UK Public finances, is predicting that when pay becomes effective in April 2020, retail price index (RPI) will be running at 2.7%. So, the vast majority of staff will yet again get pay increases below the cost of living.

The Bank’s pay proposals are as follows: 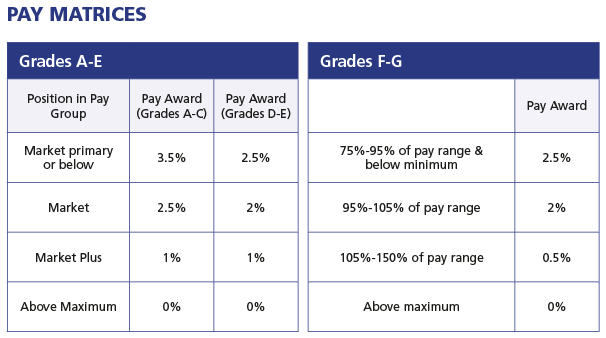 Once again, the bank and its in-house staff unions have failed to address the pay progression issue. The Bank’s pay pot of 2.4% is simply too small and is never going to make any fundamental difference to the pay of staff relative to the mid-point of their salary range.

What’s needed is an agreed approach to pay progression for all staff in grades A-G with timescales that sets out when staff will be paid at the mid-point of their salary range. It should be this approach that determines the size of the pay pot. 2.5% looks good but if the scales are moving by 2%, then movement towards the rate for the job is always going to be at a snail’s pace. Why should a member of staff at Grade C wait more than 1 year to be paid the market rate. We’ve used agreed timescales before to speed up progression and we can do it again.

In a recent Newsletter on pay we highlighted the ‘Hive’ exchange with Jennifer Tippin, Group Director People and Productivity and Matt Sinnott, Group Reward Director, where staff provided real life examples of how long it will take them to get into the ‘Market’ zone, let alone the market rate for the job. One member of staff said:

“I calculated that it would take me another 16 years to even get into the bottom of the Market rate, and about 23 years to reach mid-point”.

“How long are you supposed to be in ‘Market Primary’? 19 years feels like a long time to me!” It is a long time, about 17 years too long!

When Antonio Horta-Osorio, Group Chief Executive, was asked by the Chairman of the Work and Pensions Committee Hearing to “justify your greed compared with what other people in the bank are getting”. Mr. Horta-Osorio said: “We have been decreasing the pay gap. Last year it decreased by 4%”. [Mr Horta-Osorio was playing fast and loose with the figures. In terms of fixed pay – basic pay – the decrease in the gap was 1%). He then said: “We increased our lower paid staff by 3.5%, when senior staff have been increased by 2%”. And that in a nutshell is the Lloyds problem.

Only progression based on time in role can tackle low pay and reduce the size of the pay gap but the Bank refuses to do it because they know it will cost it more money. Accord and Unite refuse to ask for it because it will mean fighting for staff and that just sounds like too much hard work. And if they do the Bank will take away its support, without which they can’t function. Better to agree a rubbish deal on the back of a consultative ballot which ordinary members don’t participate in because they know it’s a waste of time. That’s why Accord publishes the results of the ballot but not the number of members who take part because it’s embarrassed by the numbers.

In our next Newsletter we will provide more analysis of the Bank’s pay proposals and deal with the issue of reward going forward. How will pay be determined with no performance ratings? In the meantime, members with any questions can contact the Union’s Advice Team on 01234 262868 Choose Option 1.