In a telephone conference held by Zak Mian, Group Director Transformation, it was made clear the Lloyds Board want to move away from the “cyclicality and unpredictability” of net interest income in favour of significantly increasing fee income as part of GSR 4. Interest rates are likely to remain low for the foreseeable future, leaving limited opportunities for income upside from interest margins. The bank’s new Group Chief Executive Officer, and we expect a name will be announced shortly, will need to convince the Board that he or she has plans to do that. The bank says: “it’s moving away from dependency on net interest margins. There is a desire on the part of the Board to look at more fee-based products and income which gives us more stability and moves away from dependence on the balance sheet”.

The net interest margin is the difference between the interest income generated by Lloyds and the amount of interest paid out to savers for example, relative to the bank’s interest earning assets. The table below shows Lloyds net interest income and margins from 2011 to 2020. The unpredictability of that income is why the Board is insisting that GSR4 focuses on alternative income streams. 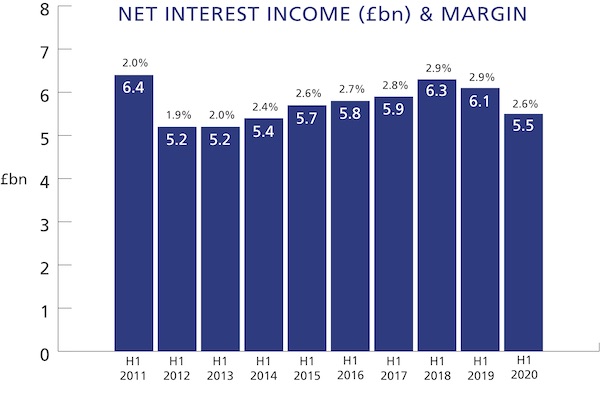 Our concern with the focus on fee-based products and income is that if not managed properly it could lead to some of the unacceptable selling practices we have seen in the past. If parts of the Lloyds business are targeted with increasing fee income that will inevitably and quickly trickle down to front-line staff who will be under serious pressure to sell those products to customers. We understand the bank’s desire to seek alternative income streams, especially given the current economic turmoil, but it must give a clear commitment not to return to the bad old days. And we don’t mean league tables and sales incentives, those have gone forever, hopefully. It’s the more subtle sales programmes we are concerned about.

Some of the bank’s competitors have already introduced these programmes. One bank for example focuses on having EPIC conversations with customers, EPIC huddles in the morning, EPIC choreography during the day and EPIC catch ups at the end of the day. For EPIC read sales and that tells you what these programmes are all about. The language used by line management may be different but the outputs are the same.  There will be some Lloyds staff who feel that’s happening now but it could get much worse when the bank begins pushing fee-based products.

We will keep members informed of developments. In the meantime, members with any questions on this or on any issue can contact the Union’s Advice Team on 01234 262868 (choose Option 1).